We are proud to be one of the largest community environment schemes in New Zealand. Our pest operations through our trap network and goat control provide a place for kiwi, kōkako, long-tailed bats and other native species to thrive.

Department of Conservation are working on the feasability of the East Taranaki Corridor; Our project sits in the heart of this, along with work being done with local iwi.  The trust is taking a collaborative approach, working alongside local iwi to establish this Eastern Corridor which will act as a refuge for native species.  This will not only provide a corridor of national significance, but also build and develop a strong conservation workforce within Taranaki. 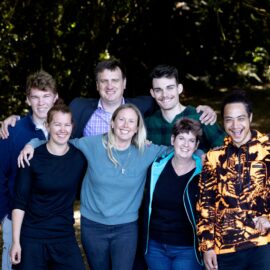 The Trust aims to restore native biodiversity within the East Taranaki region and provide a protected area for native wildlife to thrive. This is mainly achieved through using an integrated pest management approach, where the main pest species are targeted and control is adapted based on findings. To ensure that the pest control regime is leading to biodiversity gains, the Trust monitors key indicator species such as kiwi and kokako.

Our biodiversity conservation action plan, including interactions within the ecosystem, this is summarized in the picture.

Stoats are the main mustelid targeted for control throughout the 13,000 hectare project area. There are 1,300 DOC200 traps set up across 19 different traplines, with each trap spaced 100m apart along traplines, and lines spaced 1km apart. Traps are checked, rebaited, and reset every month by contractors or staff. Different lures are frequently used to introduce something novel.  An interesting trend that we have noticed with our last few years of trap data is that while we are catching less stoats and there has been an increase in weasels caught in the DOC200s. For this reason, we are looking to install DOC150s on trap lines that have had increases in weasel catches. DOC200s have an average trigger weight of 70-100g and are designed for catching stoats, and while they can catch large weasels (mainly the males) the traps will not be triggered by female weasels (average bodyweight 40-100g). We have also noticed an increase in ferret catches from 0-1 a few years ago up to 5 in 2020. The ferrets are often caught on the same traplines that tend to be along waterbodies or close to farmland. DOC200s will catch small ferrets, however are not designed to catch and humanely kill male ferrets (the larger sex). The Trust is looking to put in some DOC250s (NAWAC approved ferrets) in areas where we have the greatest ferret captures.

Rats and possums are controlled within 1000 hectares of the Pouiatoa Conservation Area through a number of different methods. In September 2020, there was an aerial 1080 operation that reduced rats to 0% RTC over five tracking tunnel lines (measured on the 23rd November). The last aerial 1080 operation was in 2020, and we are working with the Department of Conservation to move this to a three-year cycle.

To help keep rats and possums suppressed year-round, there is a network of 342 A12 and 797 A24 resetting traps set up over 1,000 hectares of the Pouiatoa Conservation Area. A12s are mainly set up on the perimeter tracks with 100m spacing, and A24s are set up on the perimeter and interior lines with 50m spacing. These were re-gassed and re-lured in January with the help of the New Plymouth Boys High prefect team. These traps will be replenished every six months. Eleven additional A24 traps were set out on the I line, which is on a side spur next to a breeding kokako pair. This is to add an extra protective barrier around the pair and their chicks.

Goat control is important for the long-term health of the forest as well as regeneration in the understory. The thinning of the forest canopy over time can lead to increased predation rates on nesting birds. Goats also reduce the fruiting trees important for kokako and other birds during the breeding season, and reduce the food availability for native wildlife.

Funding was unable to be obtained for goat control in the 2019 and 2020 financial year. The last goat control that was conducted in the Pouiatoa Conservation Area was in 2018 when 20 kokako were introduced into the project area, meaning that goat populations may have reached their pre-control levels again. We will continue to apply for goat control, and are budgeting 300 hours within 1000 hectares of the Pouiatoa Conservation Area (where the kokako have settled) and a surrounding buffer area to reduce reinvasion rates. 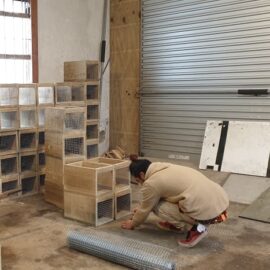 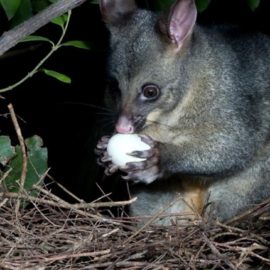 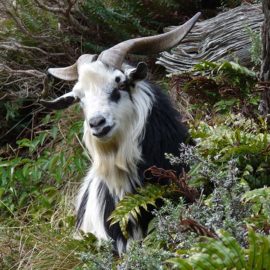 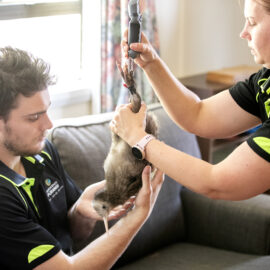 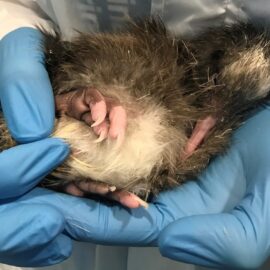 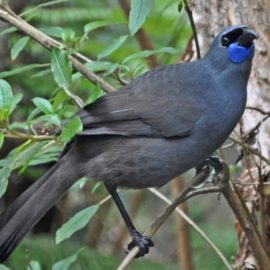 East Taranaki Environment Collective takes a science-based approach to conservation work, by using several indicator species to demonstrate the effectiveness of our pest control programmes. While pest control is at the core of our work to restore the ecosystem, we monitor kiwi, kokako, and other species to indicate whether we are successfully reducing predator populations, and if this has a positive flow on effect on wildlife.

The national kiwi recovery plan indicates that the kiwi population is declining at 2% pa. Our project is significantly

contributing to the national recovery of the western brown kiwi in NZ.  It is estimated that there are about 68,000 kiwi left in New Zealand. If Kiwi populations are declining by about 2% per year in areas where predators are uncontrolled – that’s about 20 per week.

If we don’t provide predator control 95% of kiwi chicks will be killed, and as the older kiwi die out the population will implode, and as a result we will lose our iconic taonga. Our long standing pest control network is a success story, helping to turn a declining population into one which is growing. Our project area is a stronghold for the future of the North Island Western Brown Kiwi.

Our project currently has 7 kiwi on transmitter for advocacy and research purposes.  Each month our field team monitor these kiwi.  The transmitters are able to tell us the kiwis nightly activity and shows when birds are nesting and when chicks are hatching.  This information also provides vital information on kiwi growth, survival and breeding rates in our project area.  All this scientific data is collected and contributes to the national DOC data base for research.

Fewer than 1000 pairs of kōkako currently exist in New Zealand. Without intervention extinction of the populations and loss of their particular genetic lineages are certain. The last kōkako to be seen in the the East Taranaki forest was around 1989. Since East Taranaki Environment Trust’s inception in 2005, kōkako re-establishment has been a part of our long term vision.

In 2010 we identified a core block within our project which had suitable habitat to reintroduce kōkako. Since then we have undertaken intensive predator control to ensure the habitat has flourished to provide a place for them to thrive. In 2018 the first 20 manu (birds) were caught on Hauturu Island and moved to our project. The goal of this was to establish a self-supporting population which can contribute to the wider kokako recovery plan and the restoration of the overall ecological system.

In September of each year our field team conducts a census survey within the 1,000-hectare kokako core block within the Pouiatoa Conservation Area.  In September 2021 the team covered over 50km of tracks and had a successful year, with the team identifying 13 kokako and hearing at least another 3 birds.  There were five pairs identified with potentially another pair being located, and there are at least 5 unbanded kokako in the area.  This is great news because it means that there are some breeding pairs within the Pouiatoa, and that the kokako checks are surviving.