Until recently, possums were seen as serious conservation pests mainly as a result of their effects on native plants. Although they had sometimes been seen eating birds and insects, few people previously appreciated the role possums played as a direct predator (rather than just a plant-eating competitor) in reducing populations of native birds. That has now changed following a study of the kokako (a rare bird) in which Landcare Research filmed possums eating kokako eggs and killing chicks. Four of 19 nests recorded on time-lapse video failed because of possum predation, and possums were probably responsible for one- third of the nests suffering predation found during this 4-year study. Possums have also been seen killing or eating eggs, chicks, or adults of at least five other native birds 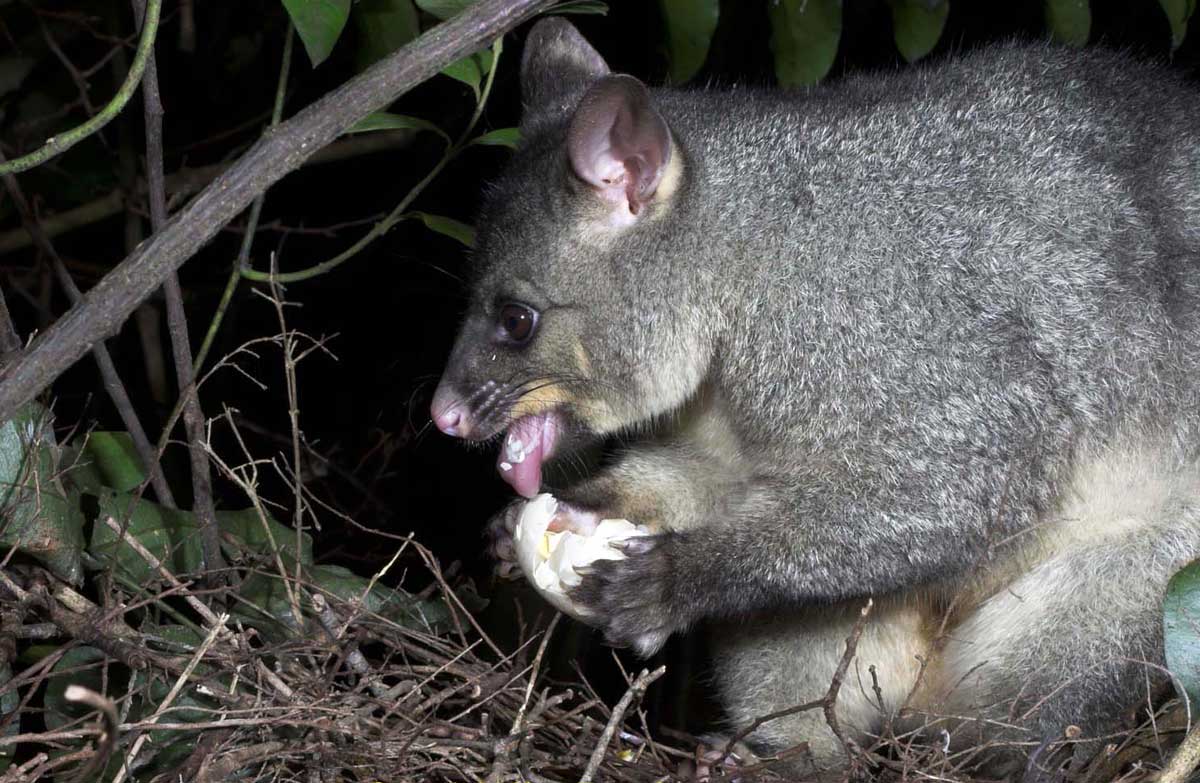 The possum has a thick, bushy tail, a pointed snout and long, fox-like tapering ears. Size and weight of possums varies greatly across New Zealand. Adult possums are typically between 65 and 95 cm in length, and can weigh anywhere between 1.4 and 6.4 kg.

There are two general colour forms, grey and black, although each of these varies greatly.

Possums can live anywhere that has shelter and a varied food supply. They can be found all across New Zealand, with the exception only of the high rainfall, mountainous terrain of Fiordland.

While possums feed mainly on leaves, they are also known to take buds and flowers, fruits, ferns, bark, fungi, invertebrates, native birds and eggs, land snails and carrion. Possums are nocturnal, although in winter starving or sick animals may emerge to feed in the afternoon.

The damage to native forests can be seen all too clearly in many areas. Possums ignore old leaves and select the best new growth. In some areas they have eaten whole canopies of rata, totara, titoki, kowhai and kohekohe.

Possums compete with native birds for habitat and for food such as insects and berries. They also disturb nesting birds, eat their eggs and chicks and may impact on native land snails.

Dairy and deer farmers have the added worry of possums spreading bovine tuberculosis.

Possums are a nuisance in suburban gardens, and sometimes even indoors.