Fewer than 1000 pairs of kōkako currently exist in New Zealand. Without intervention extinction of the populations and loss of their particular genetic lineages are certain. The last kōkako to be seen in the the East Taranaki forest was around 1989. Since East Taranaki Environment Trust’s inception in 2005, kōkako re-establishment has been a part of our long term vision. 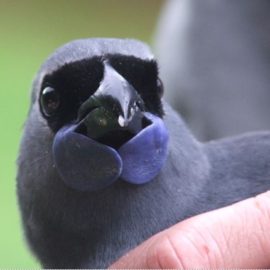 In 2010 we identified a core block within our project which had suitable habitat to reintroduce kōkako. Since then we have undertaken intensive predator control to ensure the habitat has flourished to provide a place for them to thrive.
In 2018 the first 20  manu (birds) were caught on Hauturu Island and moved to our project. Another 20 will arrive over the next couple of years.  This is an intensive and expensive exercise. We are thrilled that Methanex New Zealand were our foundation partner for the first 20 birds. Together we are dedicated to achieving our goal of a sustainable population in East Taranaki.

The critical factor for successfully establishing kōkako is having suitable habitat, and ensuring rat and possum populations are very low over the breeding season. Our kōkako will play a key role in ensuring we have genetic diversity in the Taranaki population which is required to establish a robust, sustainable and healthy population. Having a diverse genetic base is critical to prevent inbreeding. See the project map

The kōkako belongs to the endemic New Zealand wattlebirds, an ancient family of birds which includes the North and South Island saddleback and the extinct huia. North Island kōkako mainly eat fruit and leaves and, less often, flowers, moss, buds, nectar and invertebrates. 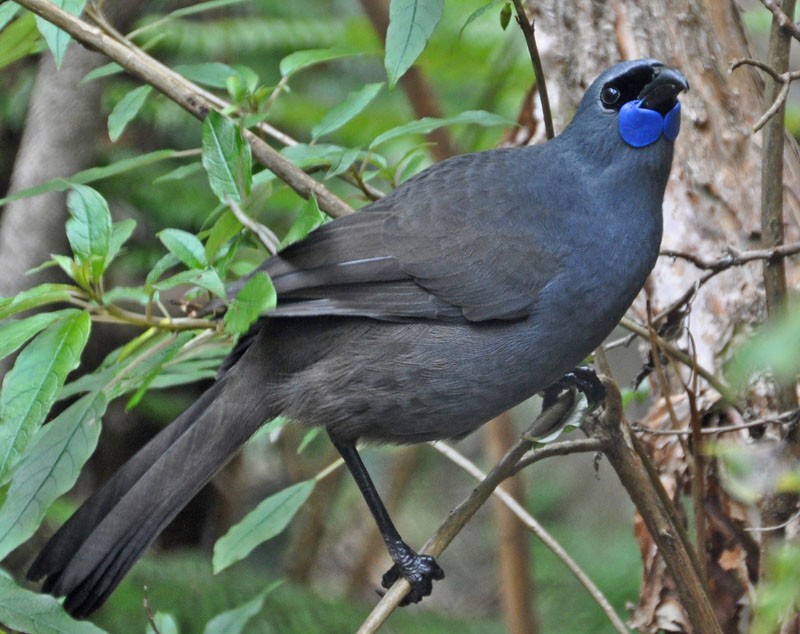 The North Island kōkako is a large songbird with a blue-grey body, a striking black mask and small, rich blue wattles that arise from the base of the bill and sit under the throat. 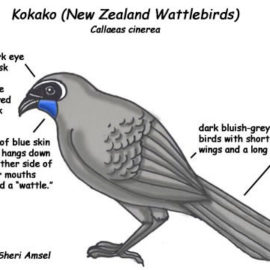 Typically, when seen backlit in forest, kōkako seem dark-plumaged and neither mask nor wattles are seen. They have long, strong legs and a long down-curved tail.

Kōkako bound and run among branches on their strong legs, interspersed with glides on short, rounded wings.  They are poor fliers; but may glide some hundreds of metres down gullies from treetops.

The sexes are alike; juveniles have pink or lilac wattles. A few adults have orange wattles.

North Island kōkako defend large territories year-round by complex singing, including the longest known duetting of any songbird in the world. The tall forests they inhabit and their alert and skulking behaviour mean that most kōkako are detected by their song and other vocalisation, frequently delivered from the tops of tall trees at dawn.  They usually reside in tall, diverse native forest, usually with a canopy of tawa or taraire with emergent podocarps or kauri.

Natural remnant North Island kōkako populations are confined to a few scattered forests in the northern half of the North Island, particularly in the Waikato, Bay of Plenty and Te Urewera National Park.

North Island kōkako typically raise one brood during November-February, after which they moult. In occasional years of good food supply, the breeding season may last 6 months and up to three broods can be raised. Two to three pinkish-grey eggs are laid in cup nests c.13 m (range 3-25 m) up trees. Incubation is by the female alone for c.18 days. Both adults feed the nestlings. Young fledge at 32-37 days old, and so nests are vulnerable to predation for about 7 weeks. Fledged young usually remain in parents’ territory for a few months, up to a year, and continue to be fed by both parents.

Predation at nests by ship rats and possums is the primary cause of current declines of North Island kokako. Food reduction mainly by possums and predation by stoats are 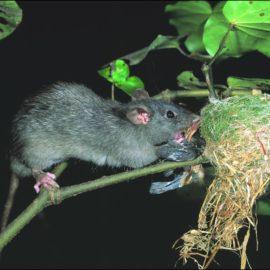 unhelpful secondary factors. All current populations must be continually managed against introduced mammal pests, either by repeated pest control on the mainland, or by vigilance against pest invasion on islands.

Ship rats and possums are routinely targeted by trapping and poisoning so that their numbers are low for the duration of the breeding season (November to February).